Hudson Library is so much more than just a place to get a good book. 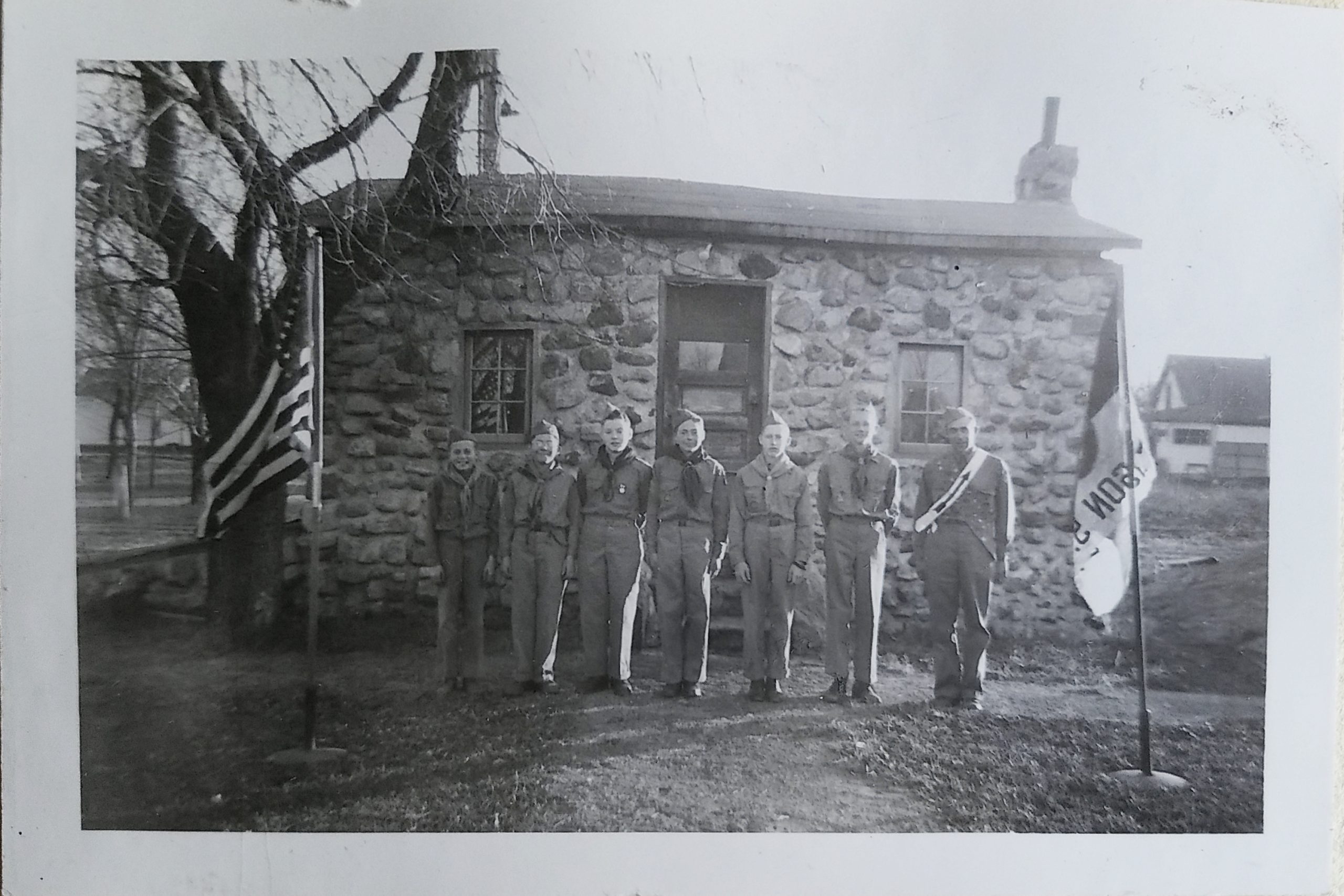 Boy Scouts Cabin: The Hudson Boy Scouts Cabin was placed on the National Registry in 2009. The Cabin was built by Troop 88, with Elwin Miller as Scout Master. The orginal charter for Troop 88 was signed on December 16, 1934. The cabin is made of Feildstone, and was constructed in the early 1940's. Many of the scouts who helped build the cabin would go on to serve in WWII, returning to Hudson later to run businesses. 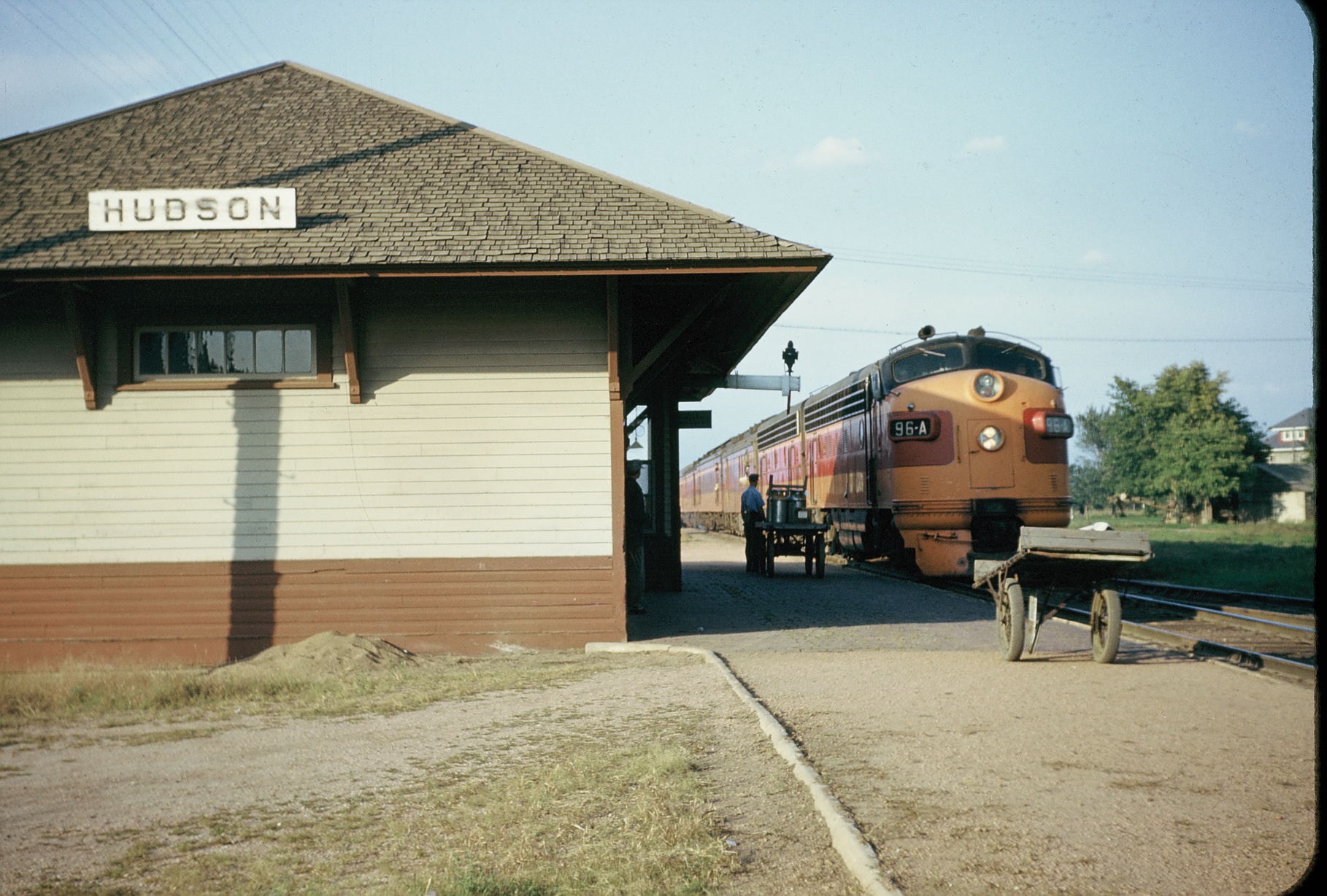 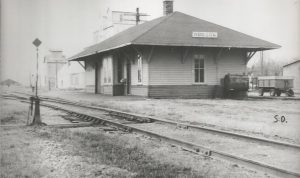 Early travel thru “Old Eden”, Dakota Territory, was by stage coach. When the railroad came through, they bypassed the orginal location of Eden. Eden was then moved to a new location to be near the railroad. The depot was built in “New Eden’, along with other businesses. Due to the confusion with the mail for Eden and Egan, the town of Eden was renamed Hudson in 1892. The first passenger train came through Eden (Hudson) in 1879, and the last passenger train on September 17, 1965. 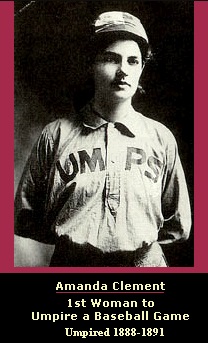 Amanda Clement, the first paid woman umpire, was born in Eden (Hudson), on March 20, 1888. Her father was a business man. but died at a young age. Her brother played ball, and Amanda and her mother would go to his games. One day in 1904, at the age of 16, when an umpire didn’t show up for the game, Amanda was asked to umpire. Amanda went on to umpire games for a number of years, which help pay her way through college. When she umpired she became known as “The Lady in Blue.” She later taught P.E., and held other jobs. When she came back to Hudson in 1929, to care for her mother, she held numerous jobs in Hudson. She was the justice of peace, city assessor, police matron, drug store clerk and typesetter for the local paper. The book, “Umpire in a Skirt” was written by Marilyn Krantz and is in the library for check-out 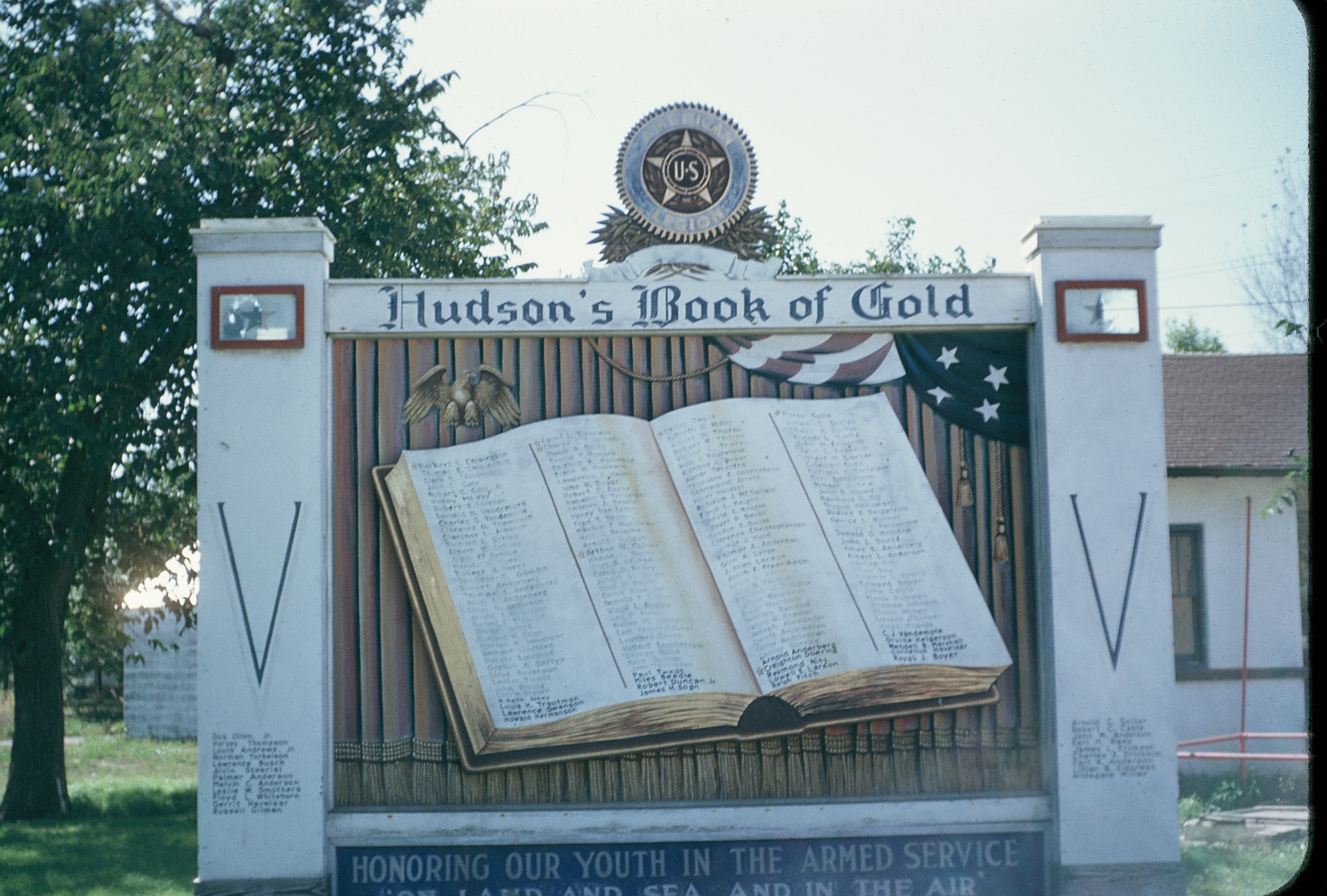 In May of 1944, the Book of Gold was dedicated. The honor roll was sponsered by Hudson’s Bergstrom Bodeen American Legion post. Names of 133 young men of Hudson and the community who were serving or had served in the armed services of their country were listed, with the option to add more names later. Hudson’s Book of Gold was designed and painted by Seal Van Sickle, who was an overseas veteran of the First World War.

More than 1,000 people attended the dedication of the Hudson Book of Gold. John Schlup, commander of the Hudson post, presided at the program. Music was provided by the Hudson High School band:  the invocation was given by Rev. Richard E. Larson and the main address delivered by Rev. Wendall Johnson. Seal Van Sickle, the artist also spoke at the program. 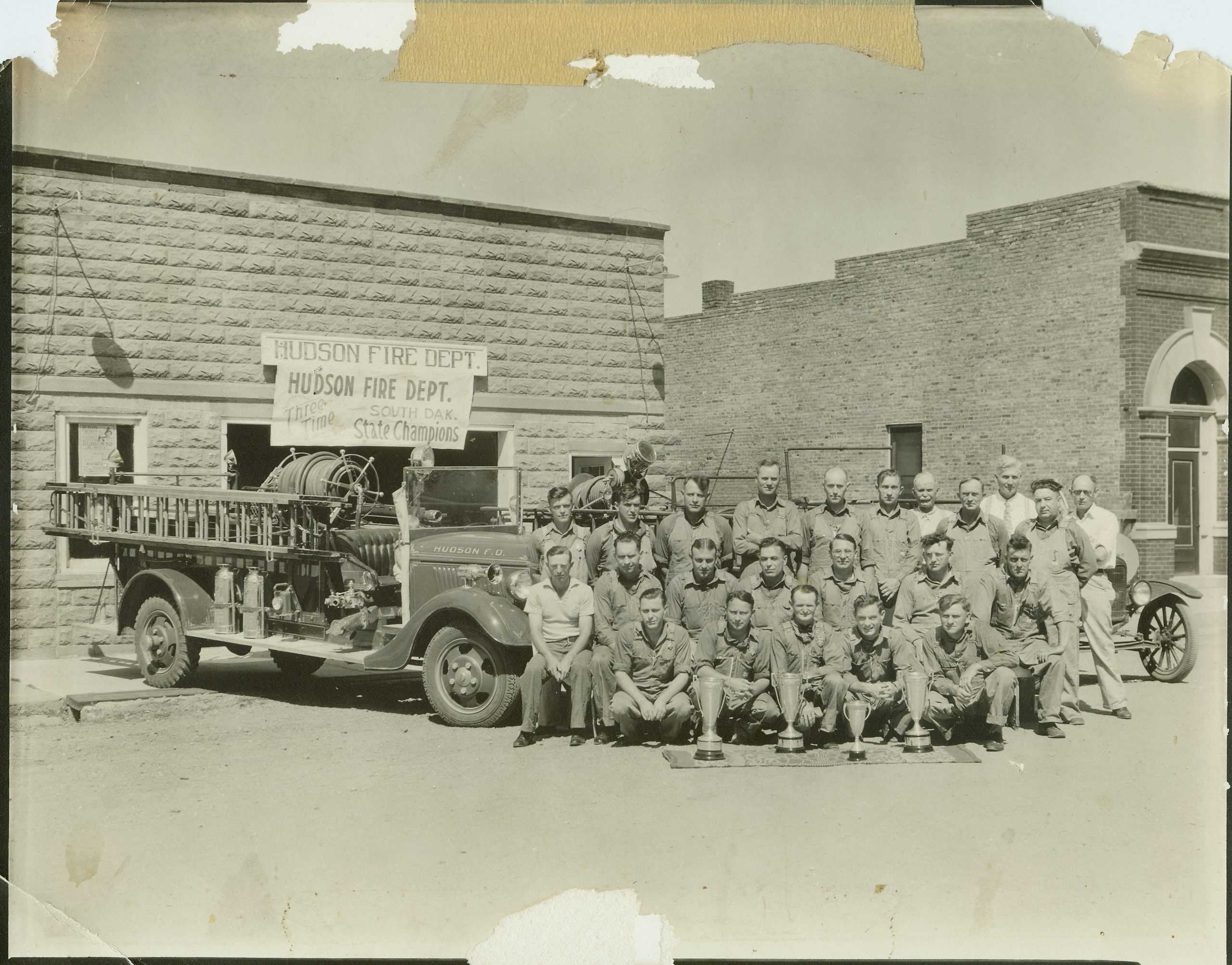 The Hudson Fire Department was organized on October 2, 1902. The first fire hall only had 1 stall, used to house horses and mules that were  used for pulling the hose cart and ladder wagon. The first fire whistle was purchased in 1903 and the first time the “noon whistle” was blown was March 1911. The Hudson Centennial Book stated in 1988, that the Hudson Firemen had been South Dakota Firefighters Association Evolution Champions 22 times, and the Firemen’s Auxilary champions twice. The old group picture of firemen in front of the old fire hall, was taken in 1937. 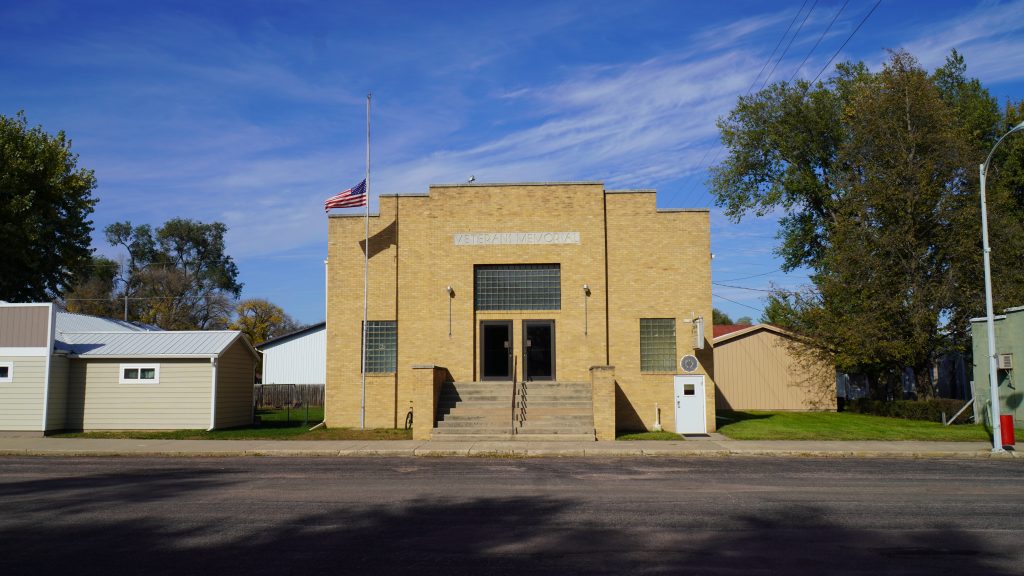 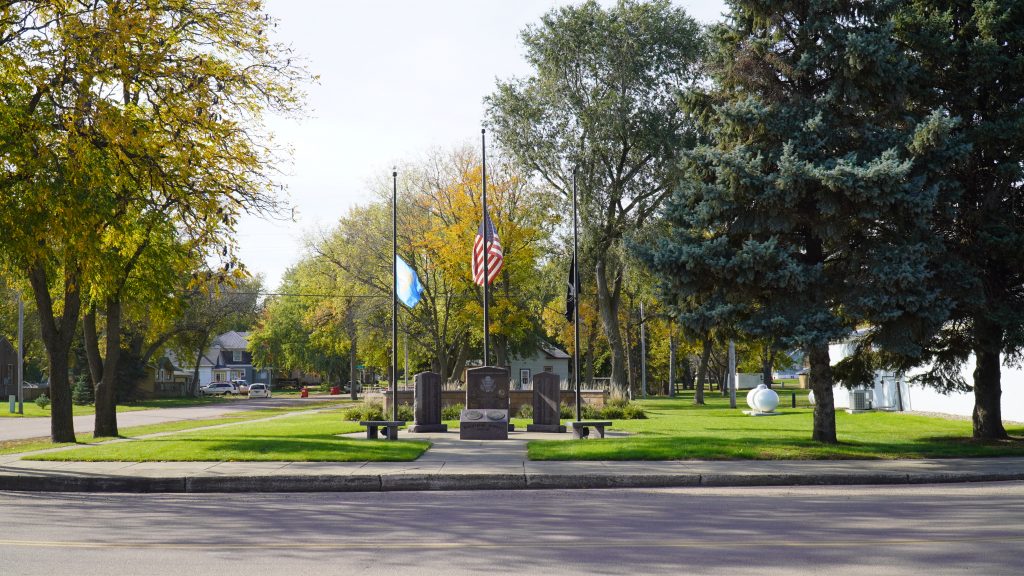 The Bergstrom-Bodeen Post 128 was chartered on December 30, 1919.  The post was named after two men from Hudson, who lost their lives in WWI. Harry R. Bergstrom and Olaf J. Bodeen, who were both killed in Argonne, France. The Legion Auxiiary was organized on May 22, 1920. THe Memorial building was incorporated on April 15, 1949. In April of 1925 it was decided to erect a monument to the unknown dead at the Eden Cemtary for the May 1925 service. 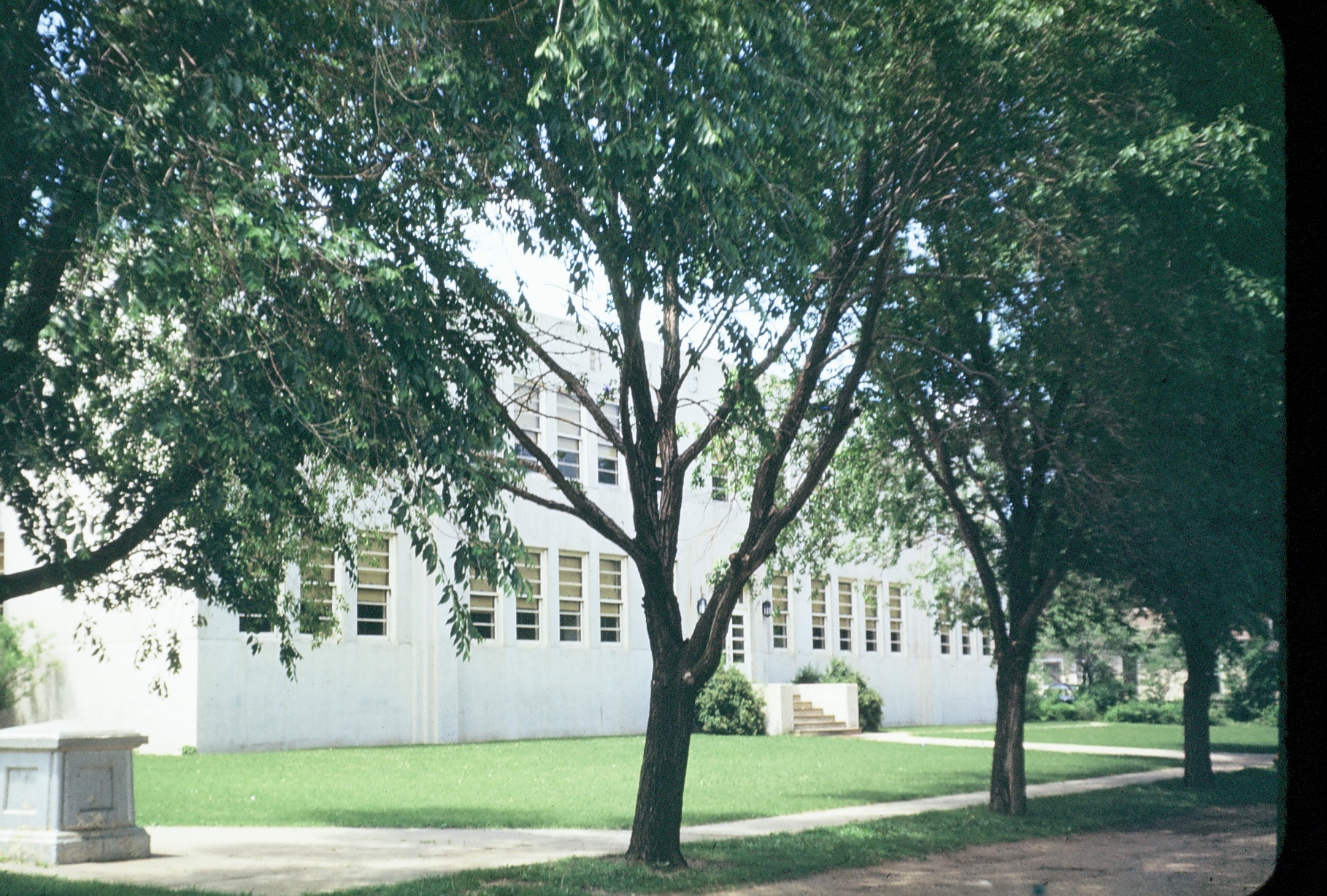 Hudson Public School:
The first school opened in "Old Eden" in 1878, in a temporary building at the cost of $300.00. In 1879 a two-story building was built for $1700.00. Later a new school was built on the same site as the 1879 building in 1894, for the cost of $6000.00 by Architect Dow. In 1941 a bond election was held to to build an addition to the orginal school. The new building was built for $75,000 and was dedicated on March 19, 1943. Then in June of 1950, bids were given for an AG building. Harold Horst's bid of $1700.00 for concrete blocks was accepted, and the lumber bid for $1900.00 was given to the Slagle Company. This building still stands across the street from where the schools are located. In 2007, fire destroyed both school buildings. A memorial to the schools is located at the site of the school buildings, where the Hudson Community Center is now located. 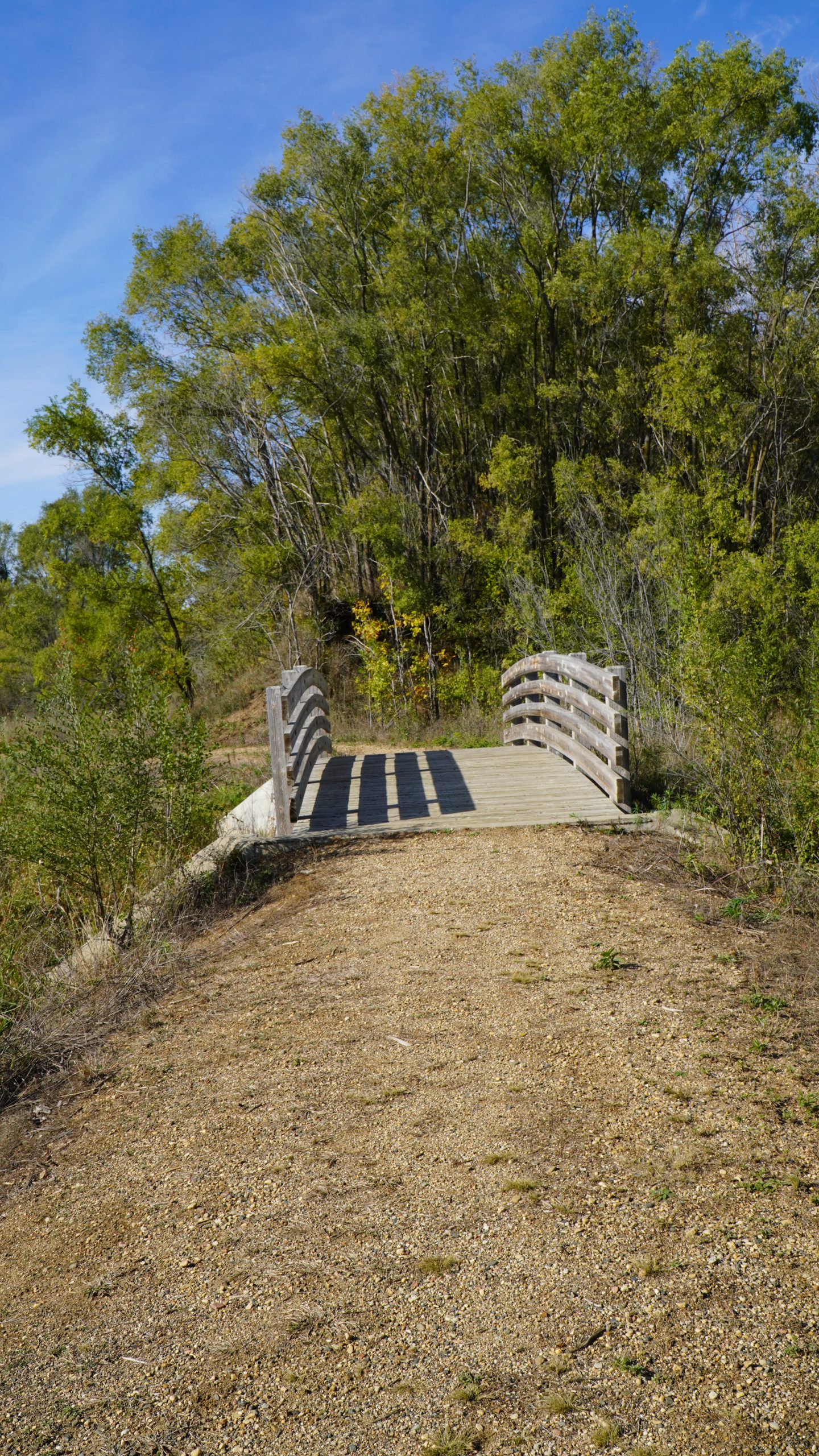 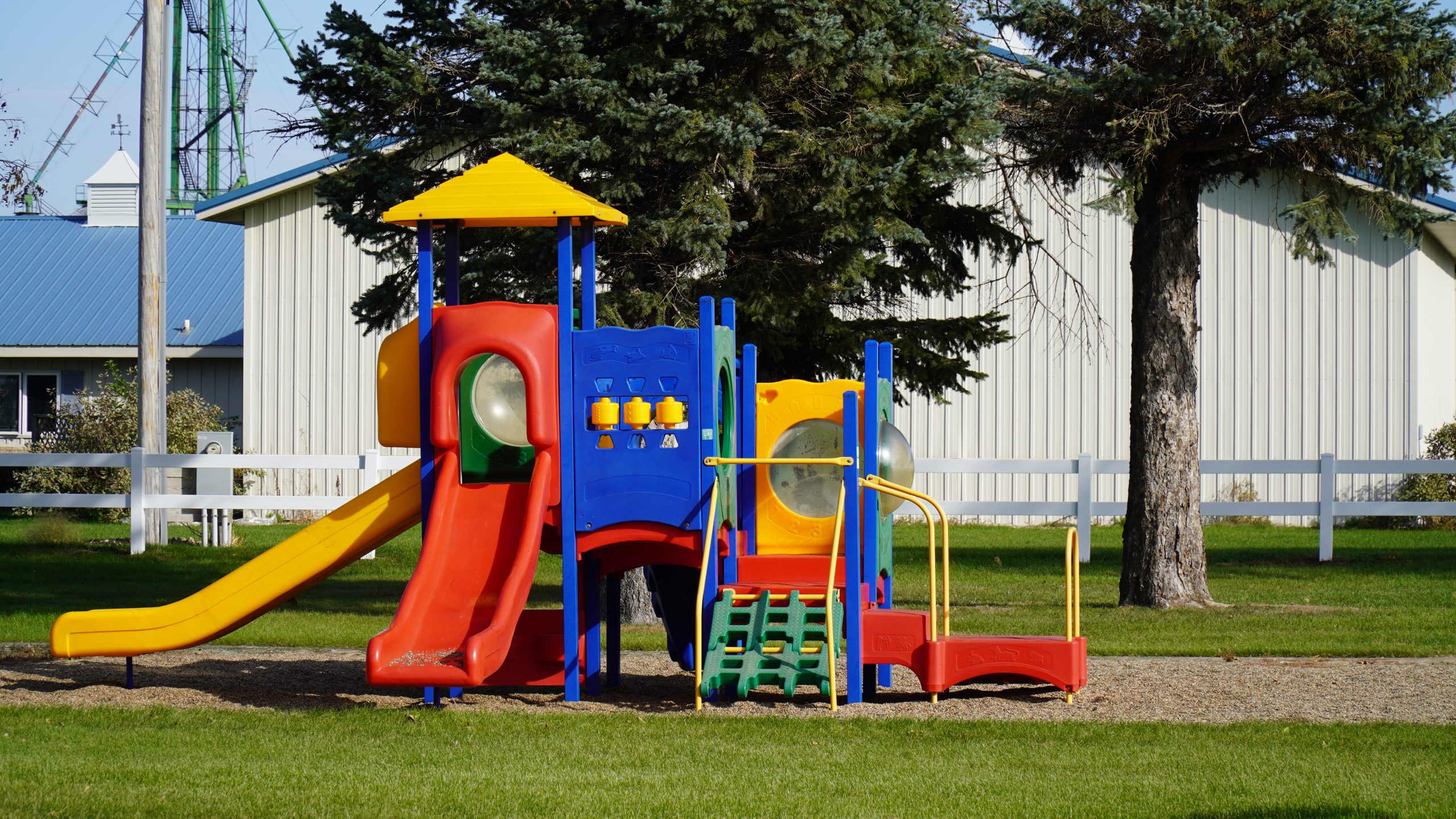 Rudolph Miller was a farmer and also held interest in the hardware business in Hudson. Rudolph's sons donated the land for the Hudson Park. In the Hudsonite on May 8, 1947 this article was posted: "On Tuesday, the Town Board went to Canton to meet with the County Commision and the Rudolph Miller Memorial Park, which joins the town on the southwest side, was incorporated within the town limits, and is part of the town now." The park was dedicated in 1948.

Library History 100 years ago in Hudson.

The first circulating library was obtained from the Free Library Commission at Pierre, in 1925  the books were loaned for a period of six months and up to the present time the Library Board has taken advantage of this privelege.

In the spring of 1925, the city voted a one mill levy for the support of the library, which now consists of 399 books.

Due to growth, a larger and more modern building was secured and in the fall of 1929 the library of 677 books was moved into the Bradley Estate Building.

In 1937 the town of Hudson purchased the former Colman building and with the help of a PWA project, the building was renovated. New shelves ,reading tables, bulletin boards, magazine racks, and filing cabinets were installed. Rest rooms were provided in the basement.

After a complete cataloging of the 1951 books , the library was moved into a new building and an Open House was held Jan. 22, 1938, at which time the public responded so splendidly, thus showing their interest and enthusiasm.

The library is an asset to Hudson and the community and to which one may point with pride. It not only serves the local adults and children but extendsto homes within the radius of many miles.

The Hudson Public Lirary welcomes your patronage and wishes to serve the communnity. Please feel free to borrow books, magazines and pamphlets at all times. 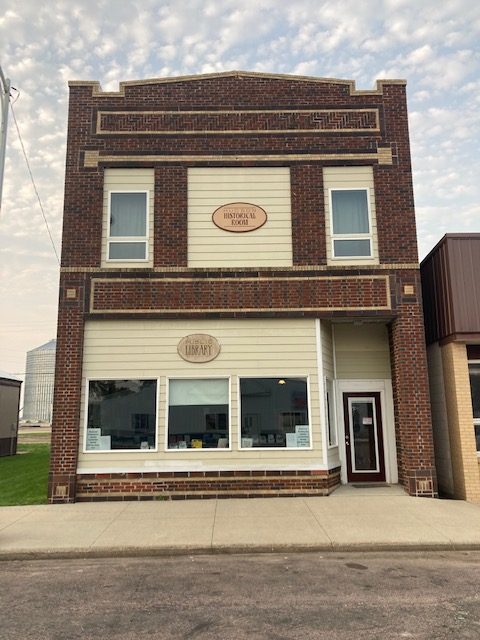 Get a library number today

For on-line, e-books from South Dakota Titles-To-Go, Sora and Libby, stop in or call the library and get your library card number to start downloading e-books.

below are the new books in the library

Previous
Next
Scroll to Top